All About Crappie Fishing and the best time to catch Crappie Fish. Its one of the most popular fresh water fishing species sought out in Canada and the USA. The Popular Panfish is highly regarded when it comes to both being fun to catch and delicious to eat!

However its sometimes hard to catch crappie year round. These are not the easiest to catch at all times, but they have their best moments. Other times of the year you will have to search much harder for them especially if you do not know what to look for.

2 Types of Crappie Black and White

This little fish is found all over North America.  Crappie come in two major species: white crappies and black crappies.  These excellent little game fish are nice to hunt for during almost any time of the year.  They are found mostly in ponds, rivers, and small bodies of freshwater and feed exclusively on small insects, larvae, minnows, and microscopic prey.  Crappie usually grow to about half a pound to a pound and around 16” in length.  They have been spotted weighing in at five pounds and nearly two feet long, though. 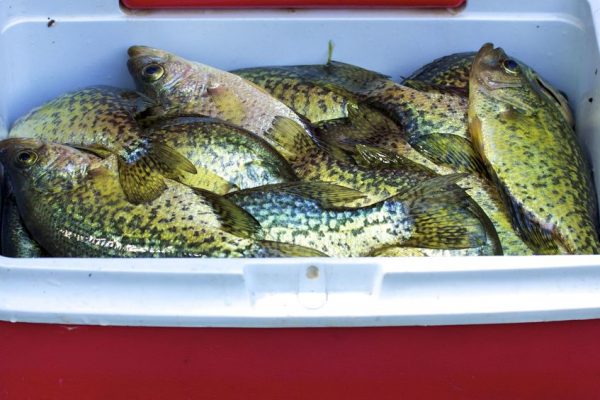 Best Time to Catch Crappie Tip: They are Schooling Fish

The crappie are always found in schools, sometimes with other flat fish, and they prefer to hang out in grassy patches or nearby submerged logs.  Crappie like to stay hidden and will typically stay submerged under deeper waters until it’s time to feed when the sun is setting/rising.  All bets are off when spawning season starts, though, as they congregate in high numbers at shallow waters, which is when most fishermen find its the best time to catch crappie most of all, and come out to catch their fill.

The number one thing you have to do is find one first. Once you catch one you know there will be others around as well. Crappies are even great fish to go for during the winter, as they stay active even when ice has frozen over.  A popular fish among ice fishermen, as they are fairly light weight and don’t require too much struggle to reel in through the average 6 to 8 inch ice hole.

Crappie can be a deceptively easy fish to catch, especially for amateurs.  They are touted as a fish that is always in-season, a fish in every pond, and etc.  That doesn’t mean that crappies are just waiting to be caught, you have to know what works and what doesn’t, which requires a lot of patience and experience.  Luckily, we have some tips and techniques that will speed up the learning process.

How to tell white crappies from black crappies, the white have vertical stripe patterns and the black crappie has a more speckled, spotted pattern. This is the quickest and easiest way to distinguish, without having to count the spines to gain even more information and confirmation on whether you have a black or white crappie. Do not worry though, they are both delicious.

Small jigs for a small fish.  This one should be obvious, don’t come with a heavy rig to catch a light fish.  These fish are often nicknamed the Papermouth, which means hooks can rip really easy through their lip if you are going in with too much muscle.  Use a light minnow bait and keep your line tight to prevent too much movement.

Make sure you tie your jig with a loop knot, as well.  This will give more realistic buoyancy if you’re using an artificial jig when casting—combine this with a vertical jigging motion and you’ll quickly gain the attention of nearby crappie.  If you’re fishing with  live bait, then you can just go for a simple slip bobber to float the right amount of depth, which will typically hover at around three to six feet deep, depending on the season.

Best Fishing Time for Crappie is Dawn or Dusk

If you’re fishing outside of dusk or dawn, you might not see a lot of action on your line, especially if you’re not jigging properly.  Keep it slow, yet consistent and don’t give up early on your cast.  Unless you misread the fishing spot, just be patient, the crappie will come to you.

For those who get frustrated easily, you should come prepared with a topographical map, that way you’re not left guessing at whether you’re hitting the right depth to target the crappie.  There’s no shame in relying on a map, it’s going to save you hours of frustration and there’s still plenty of challenge left catching them, it will just speed up the discovery process.

Worms work but minnows are best. Small jig heads, pink, white, and green have produced many a crappie for me.

Look for Crappie in one or two feet of warmer water. The opposite is true in the winter where as in the summer months bright sun and very warm water may shy them to shady cover. However, in the winter, warming sun rays may cause shallower waters to become a prime spot for winter crappie.

As mentioned earlier, catching crappie is going to vary as to which stage of their breeding season they are in.  Veteran anglers will tell you spring is prime time for crappie, as they spawn in huge numbers along shallow waters.  You’d have to be blind not to catch one then.

Of course, location still plays a big part, since temperature and acidity can still shape behaviors.  If you’re in a big lake, crappie will prefer to spawn where temperatures are in between 58 and 66 degrees Fahrenheit.  This means they will likely be in the shallower, muddier areas of the lake during spawning time, making bank fishing a viable method of catching crappies.

You Need to Find the Crappie Habitat

First, do some research on surrounding fishing locations.  You would rather spend time getting to know these areas intimately than to spend twice the amount of effort sitting at any number of “popular” spots that take longer to catch.  Look out for those small inlets, submerged logs, or thick reeds that crappies gravitate towards.  Sometimes crappie will move out of high-traffic areas if they feel too crowded.

Best Time To Catch Crappie is Before the Spawn

Before crappie begin to spawn, they will move out of their more secluded spots to stage at the mouth of rivers, creeks, and coves.  It’s like a big block party for crappies.  Once spawning commences, this is when you’ll start to see seasonal anglers converge at certain river banks and docks.  They’ll show up in shallow waters in huge numbers, but they’ll still hover near weedy areas and rocky inlets, you have to know your surroundings to take advantage of them at this best time to catch crappie slabs of delicious meat.

Be aware that not all crappies take to shallow waters to spawn, some prefer to do it at deeper spots, especially in less murky bodies of water, like lakes and ponds by mountainsides.  When they do spawn in shallow waters, however, it becomes obvious, as they are very busy and can be spotted popping above the surface as they move into place.

After spawning season is not too bad for fish, as well.  Crappies will move in large schools to feed together, making it a prime opportunity to dangle a minnow lure in the middle of a minnow-rich location.  You might not get bites as quickly as spawning season, but you certainly won’t walk away empty-handed.

As you get used to locating and targeting crappie, you can increase your volume of catches by mastering the art of vertical jigging.

Lets not forget the worst time to fish for crappie. That is, you guessed it, mid day when the sun is the brightest and hottest, warming the waters surface. Crappie tend to stay very close to their home in structure they like, perhaps striking the odd bug that may swim by as long as its close to home. The shade down deeper inside and under structure out of the suns rays is where they will be.

Crappie will look for the optimum water temperature they like.  Fishing at night is still not a good idea. However, unlike the mid days of hot summer sunshine, you should have better luck fishing longer into the morning and earlier in the afternoon. The fish will be looking to feed and get ready for winter so bites should not be hard to find as long as you get into the right areas of cover at the right temperatures.

Move around till you find a good zone. They should be feeding good right  now so if no bites, pack up and look for a better spot. Find the fish, and they will bite.

Crappie on a Plate Are Crappie Good to Eat?

Needless to say, crappie aren’t prized fish to catch for sustenance, as they’re not the biggest of fish and they’re a bit on the bony side.  They do cook well on the open grill or pan fried.  Just fillet a nice 1-1 ½ pound catch, bread it, and fry it up for a nice sweet fish that is close to that of a bluegill or yellow-tail.