Perch Fishing in Russia Submitted Video By Ivan on the seventh edition of “Fishing as brothers” Series. Here we see the brothers in a fishing video heading out on snow mobiles across a field and lake to their fishing hole for delicious Russian Perch.

Perch Fishing in Russia as Described by Ivan

From his words in the video submission:

Catfishing.ca thanks Ivan for his ice fishing for perch in Russia video. He is letting us get a look at the set up and gear the brothers were using out on this day.

Perch Fishing Rigs Used in this Video from Russia

It appears as they had a combo rig set up. One brother using a spoon as flasher with a live baited hook at the bottom. Another had a rigged out duel set up with a plastic grub hooked several inches above an ice fishing multi hooked jig resembling a minnow.

Owning several of these myself in various colors. I have not fished them in a combo before with a grub like above but will try that combo out as I see it had good success.

Typically just bait the hooks with a minnow or minnows, or worm bits. and just jig that. However as you proved using the soft bait satellite above the natural colored minnow bait won the contest among you. I will have to use this combo myself to see if I can attract some lunker perch using this similar method.

Attracting Perch Through the Ice To You

The last time I went perch fishing I was jigging a perch colored lure and some spoons radically up and down. This was an attempt to attract over perch and get them to vertically stack up under our ice fishing holes. Once there I attempted to catch them but before I could, WHAM, In comes a 50 inch Tiger Musky. This big musky puts on the brakes and gulps in 5 yellow perch. This included my small perch soft plastic bait and off she went… several times. What a battle, and what a thrill watching a musky inhale everything instantly out of nowhere.

Thanks again Ivan for the perch fishing in Russia video submission. Best of luck to the fishing brothers and their Fishing as Brothers Series from us in Canada. 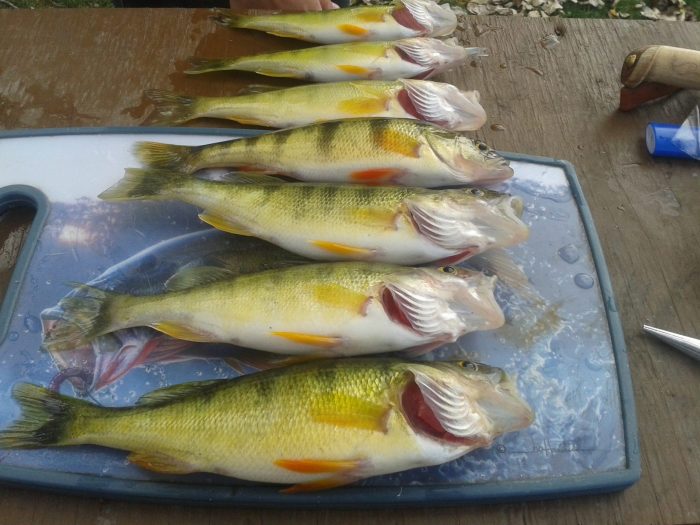